Tap to go to our mobile site

Advanced Search
×
Back to Listings 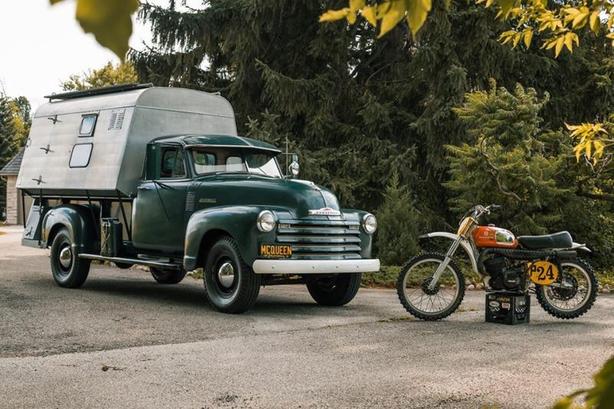 This 1952 Chevrolet 3800 is a one-ton stepside pickup that is equipped with a custom camper and was formerly owned by film icon Steve McQueen. Finished in Forest Green, the truck is powered by a 235ci straight-six backed by a floor-shifted, four-speed manual transmission. The camper was built in 1952 by Northern Sheet Metal of Yreka, California, and is equipped with a double-size bed, drawers, shelves, a roof platform, and a diamond-plated rear bumper. McQueen is said to have purchased the truck in the late 1970s, and after his passing it was sold at the 1984 Steve McQueen Estate Auction in Las Vegas, Nevada. It was acquired by the selling dealer in 2016 and is accompanied by a modified 1972 Husqvarna CR250 inspired by the film On Any Sunday. This Chevrolet 3800 is now offered in Ontario, Canada, with California registration documents in Steve McQueen s name, a McQueen certificate of authenticity, and Ontario registration. Ex-Steve McQueen 1952 Chevrolet 3800 Pickup with Camper and Husqvarna CR250 Steve McQueen reportedly purchased the truck in the late 1970s from a farmer while living in Malibu, California. It is believed that in late 1980 Mr. McQueen and Reverend Billy Graham drove this truck from Santa Paula, California, where McQueen spent his last years, to a Ventura County airport so that the film star could take a flight to Mexico for what would be his final cancer treatment. Ex-Steve McQueen 1952 Chevrolet 3800 Pickup with Camper and Husqvarna CR250 The longbed, stepside body is finished in Forest Green and features a five-window cab, a body-color windshield sun visor, extended side mirrors, and a white front bumper. Other equipment includes three five-gallon gas cans mounted to the running boards, a driver-side spotlight, and two lockable tool boxes. Black steel wheels feature chrome hubcaps and are mounted with Tornel bias-ply classic truck tires sized 7.50-17. Ex-Steve McQueen 1952 Chevrolet 3800 Pickup with Camper and Husqvarna CR250 Called Dust Tite, the custom camper was reportedly fabricated in 1952 by Harold Van Hoosen of Northern Sheet Metal in Yreka